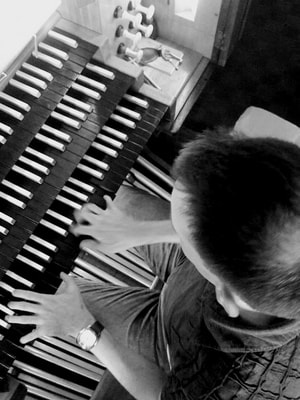 Jeremy studied with Ian Hare at Carlisle Cathedral, and then at the Royal Scottish Academy of Music & Drama with early music specialist, David Hamilton, and John Turner, then organist of Glasgow Cathedral.

He is available to play for services, weddings and funerals within the East Midlands, Lincolnshire and the Greater Peterborough areas and has built up a significant number of rewarding associations with various churches and clergy through his reliable, sensitive and efficient service. Jeremy has a wide solo repertoire which encompasses most occasional music, including oft-requested pieces such as Widor’s Toccata from his 5th Symphony, Bach’s Toccata and Fugue in D minor BWV 565 and Marches, Toccatas and Fanfares by Dubois, Gigout, Walton, Mendelssohn, Wagner, Renaud and Boëllmann, as well as more reflective repertoire, including works and arrangements such as Elgar’s Nimrod, Samuel Barber’s Adagio and Albinoni’s Adagio in G minor. Lighter repertoire can be played, and Jeremy is very happy to play any music requested. He can advise on choosing music appropriate to any occasion.

Wedding and funeral fees are often set by a particular church, following guidelines set out by the Royal School of Church Music or similar. If being booked independently, Jeremy’s freelance fees are very competitive, especially given the quality of musicianship offered and his willingness to spend the time and effort needed to ensure his services are tailored to the needs of individual situations.

​Jeremy also works regularly with other musicians, and can recommend or help to arrange a singer, instrumentalist or choir for any service that requires them. No fees are charged for recommendations or for helping with arrangements and the fees of singers, instrumentalists and choirs would need to be negotiated directly with the musicians concerned.